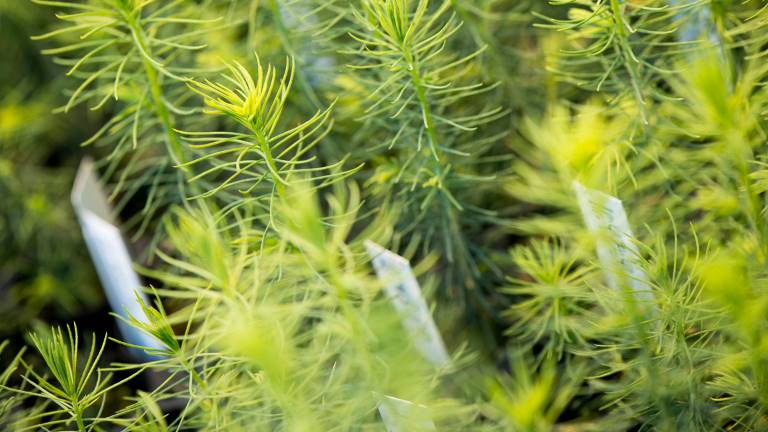 The seed orchards are ranked according to a performance index that combines growth and survival into an estimate of areal production over a rotation. The performance index is expressed relative to unimproved local stand seed. Thus, an index value of 120 means that the seed orchard crop will achieve a 20% higher areal production over a rotation compared to local stand seed.

Ranking for growth or survival
It is also possible to sort and rank the seed orchards according to either growth or survival. For example, it might be of interest to rank the seed orchards according to survival at a very harsh planting site. Just as the performance index, growth is expressed relative to unimproved local stand seed, whereas survival is given in per cent.

What is pollen contamination and how does it affect the seed orchard crop performance?

How are the effects of climate change included?

In Planter’s guide, the current climate is used in the model estimates of survival, whereas growth is estimated in a future climate corresponding to half of the rotation age, which in our conditions is approximated as the average climate 2050 using climate scenario SRES-A1B. We consider this combination of survival and growth to provide the best climate adapted compound estimate of volume production per unit area. Climate-related Scots pine mortality predominantly occurs in the early developmental phase, from planting up to 2.5-meter height prompting use of the current climate in model estimates of survival. To make use of the improved growth conditions with a warmer climate, we consider the time of maximum mean annual increment (MAI), which is around mid-rotation. Consequently, the Planter’s guide recommendations take into account that young trees must survive in the current climate but should also be able to benefit from the increased growth potential of a future warmer climate later on in the rotation.

What happens when “current climate” is selected?

At present, only one climate scenario (SRES-A1B) is available in Planter’s guide but there is an option to select “current climate”. When the latter is selected, growth is also estimated in the current climate and the growth effects of the future climate is not included in the recommendations. The reason for providing this option is for the user to be able to evaluate the magnitude and consequences of these effects on the recommendations.

Why is there a square when I click on the map?

The square or grid cell is a part of grid covering both Sweden (4x4 km) and Finland (10x10 km). It represents the currently highest spatial resolution available for each country, for which we can predict the future climatic conditions by adding scenario data. It is therefore the average climate of the grid cell that provide the foundation for the deployment model recommendation. The grid cell size is therefore a trade-off between a high spatial resolution and the ability to include reliable predictions of future climate conditions.

What is “adjustment for local conditions” and how does it work?

What is temperature sum and how much is a day degree?

We have defined harsh and mild conditions by adding or subtracting 100 day degrees. This would approximately correspond to a difference of one degree Celsius average temperature during the vegetations period at harsher sites in northern Sweden or Finland and half a degree Celsius at milder sites in southern Finland and southern and central Sweden.

Why is it not possible to adjust the altitude of the planting site?

In an earlier version of Planter’s guide only covering Sweden, it was possible to adjust the planting site altitude to adjust the local climatic conditions (harsh/mild). The transfer effect models in the earlier version was based on simplified climatic data and in the current models much more of the spatial and climatic variation is seized by the high-resolution grid structure. This means that altitude does not have the same explanatory power in the current models and the adjustment for local conditions are instead performed by changing the temperature sum. However, as a coarse rule of thumb and all other conditions the same, 100 day degrees corresponds to a change in altitude of 100 m on a harsh site and 75 m on a milder site.

How come seed orchard crops with a southern origin is recommended for use at relatively northern sites?

In the current version of Planter’s guide, seed orchard crops from southern seed zones in some cases perform well farther north than in earlier versions. The main reason is that the new models and recommendations explicitly take the effects of a future warmer climate into account. At milder sites in central Sweden and along the coast in norther Sweden and Finland plant material with a later growth cessation can utilize the longer vegetation period during autumn in a warmer climate. This means that a slightly longer northern transfer is possible and result in increased growth at these mild sites. By changing to “current climate” and thus not including the increased production potential of a future warmer climate, this effect is apparent, in particular for the site types described above.

Availability of seed/plants from the recommended seed orchards

Planter’s guide presents all seed orchards that are registered, in production and are considered feasible for the selected planting site. However, this does not necessarily mean that seed or plants from a recommended seed orchard is available. For a given seed orchard there is additional information by clicking on it. Among other things the seed orchard owner(s) is/are shown, and this can provide information necessary to find the appropriate nursery or supplier to ask about plant or seed availability. Old orchards that are decommissioned and no seed is available are removed from Planter’s guide at the request of the seed orchard owners.

How are the deployment maps for the seed orchards generated?